Something went very wrong today. I was just about to start the last run of the day, my Sidewinder’s hold crammed full of about 10k credits worth of Combat Stabilisers bound for Azeban City, but after the launch pad released the ship it inexplicably started thrusting backwards.

No amount of forward thrust input from the X52s throttle control would counter it and in seconds I was being thrown about like a ball bearing in a washing machine.

And that’s when the station opened up on me for loitering at the pad for too long!

It’s not like I’ve never had a few dodgy landings, or an altercation or two at the station entrance, but I have kind of got the hang of the docking and leaving thing, and I do have a trail of successful trades as proof, but when it goes wrong it happens FAST.

Anyway, long story short: Hold was full, bank was almost empty. Boom! No insurance = no replacement stock or cash = back to the drawing board. And when I was just about to be able to afford my first machine gun, too.

Here’s a video of what I managed to capture of the gory details;

Ok, so the “bug” here isn’t the throttle weirdness. I tracked that back to this slider control on the X52; 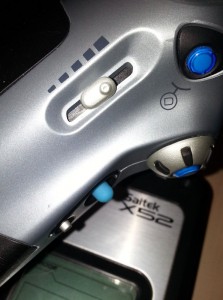 It seems that slider was tied into the forward and reverse thrust binding for landing manoeuvring only, and at some point between landing and launching, I must have moved this control just enough to cause a problem, but not enough to be noticeable with a quick glance when everything started to go haywire.

However I think the problem is that the station interior becomes invisible when in close proximity to the observer, so what looks like a clear route ahead suddenly isn’t, and you have no idea which direction to try and head for to get out of trouble. And of course it doesn’t help when the station defences start shooting at you while you’re immobilised.

Anyway, that’s that. I’ve started rebuilding my cash reserves again. Hopefully in a few days I’ll be back to where I was yesterday.